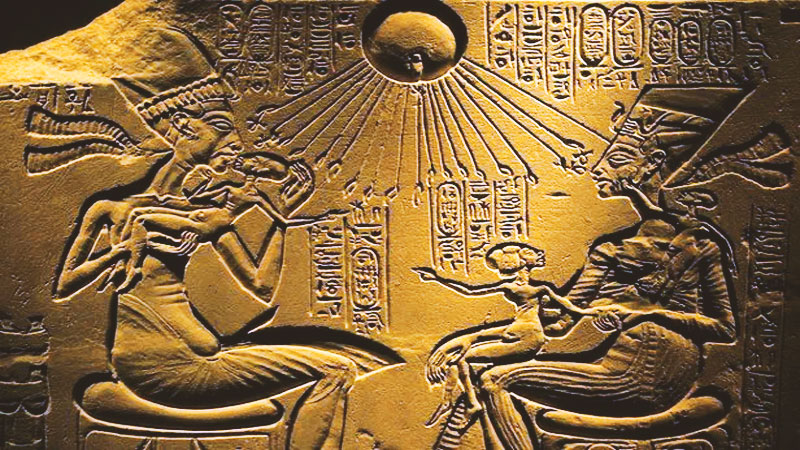 Although Akhenaten and Nefertiti are Egypt’s most well-known monarchs, this was not always the case. When archaeologists unearthed the city of Amarna in the 19th century, they learned that their ancestors had sought to obliterate their history.

King Akhenaten conducted the “Amarna Revolution,” relocating Thebes’ capital to Akhetaten, his own city, which ultimately came to be known as Amarna. Pharaoh Akhenaten Converting Egypt to the worship of one deity, Aten, was his goal with Nefertiti.

When it comes to religion, the multiplicity of deities has always been the standard. This was an early example of monotheism.

The young pharaoh, who became Egypt’s first king at the age of 15 in around 1,364 BC, declared himself the son and prophet of Aten and changed his name from Amenotepe IV, which meant “Ammon is pleased,” to Akhenaten, which means “Active Spirit of Aten,” rejecting the worship of Ammon, who had brought the priests great wealth and political influence.

Aten’s devotion and artistic and pacifist manifestations marked his government, making the revolution also apply to all works of art. Although royalty has always been depicted in an unrealistically glorified way, the representations of royal families during that time were intimate and strangely real.

Compared to the typical standards of Egyptian art, the royal family has been depicted with traits that are clearly exaggerated: a prognata jaw, a small neck, dropped shoulders, a prominent belly, broad hips and thighs, as well as slender legs. ” Princesses are commonly represented with an egg-shaped extended head, while facial characteristics were marked by angular, wide eyes, plump lips, nasolabic wrinkles, and ear shield holes.”

So bizarre is the family’s look, some researchers have speculated that they could be suffering from Marfan Syndrome, a hereditary disorder.

There are many who believe that these are indicators of alien origin, however despite numerous Amarnian Period items being uncovered and theories being advanced, the mummies of Pharaoh and his queen remain undiscovered, and the enigma remains unsolved to this day.

Aten: Is This a Extraterrestrial Ship or a Celestial Sun?

Only Akhenaten and the royal family could speak for Aten, the one and sole genuine deity, because they served as the only go-betweens between Aten and the people.

Pharaoh Akhenaten himself left a hymn called the Hymn of Aten, which has a remarkable resemblance to Psalm 104 of the Bible, describing a universal creator of all things, not simply the Sun:

For a long time, men had been sleeping like the dead; now they lift their arms in praise and everything begins to move. In the womb of the mother, Aten raises the son, the seed in men, and spawns all life. As a result, he is able to cater to people of diverse ethnicities, natures, languages, and complexions. When Aten created the Nile, it rained throughout Egypt and around the world. He is always the same, no matter what time of day or where you look at him.” – Hymn to Aten.

This sun-like disc shone in Aten’s depictions, bathing the royal family in heavenly awe and knowledge.

Whether or not pharaoh heard these communications directly from Aten or if this was purely symbolic remains to be known. Whatever the reason, Pharaoh ordered the closure of all other temples and the destruction of the ancient techniques.

Some ancient astronaut theorists believe that Akhenaten may have attempted to erase ancient religious beliefs in order to conceal the true origins of the human species, created through genetic manipulation by alien beings and leading their followers away from the truth, while others believe that Akhenaten may have presented two divergent theories,

Tsoukalos believes that the description of Aten points to the existence of an extraterrestrial ship and possible direct contact with alien beings who brought the “wisdom of heaven,” or even some sort of technological device that would allow communication with these beings from another world. For Giorgio Tsoukalos, the description of Aten indicates

As a flying solar disc, Aten has been referred to as Aten. But if the Sun could teach you multiple subjects, how much more might Egyptologists say about it? The response is a resounding “no!” If our ancestors encountered a technology they couldn’t understand and misconstrued it as something natural, then we need to investigate whether or not our predecessors misunderstood it.

Pachacuti, a previous Inca king, is the subject of one of several tales about golden discs with magical abilities in South America, one of which alludes to a mirrored Solar Disk.

In another legend, a priest of the Inca Empire who was fleeing the Spanish conquerors hid in the mountains to protect the Golden Disc created by the gods, which he used to open a portal through which he entered and disappeared, leaving the disc in the care of the shamans who guarded the “Gate of the Gods,” where it remained for centuries.

A record from heaven is worshipped in every civilization on the planet, no matter how old it is. Giorgio Tsoukalos speculates that the disk may have been a technical gadget with an alien link.

In the Pyramid Texts, the oldest religious texts found in Egypt, Aten is mentioned as a manifestation of the sun god Ra, who was already mentioned in these texts and would have been elevated to a higher status and above other gods, referring them to disappearance or a secondary position, in order to keep religious control in their hands and appropriate the goods and riches obtained by the ancient pries.

Later pharaohs discredited Akhenaten, referring to him as “the heretic pharaoh” in their historical records, after the death of Akhenaten.