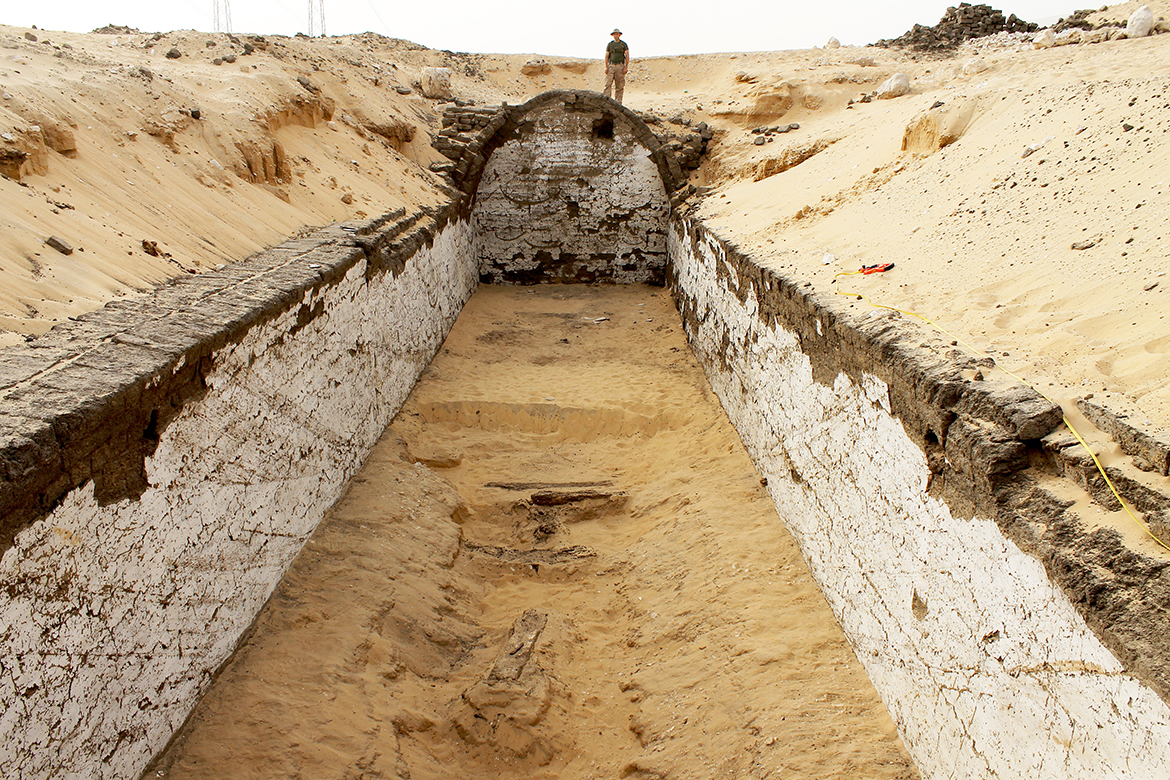 An multinational team of archaeologists lead by Dr. Josef Wegner of the University of Pennsylvania’s Penn Museum.

“Archaeologists have long recognized the ancient Egyptian practice of burying boats in association with royal funerary complexes. Variable preservation, paired with the only partial investigation of most royal mortuary sites, however, has produced a still limited picture of the development of this long-lived tradition,”

“Boat burials associated with pharaonic royal tombs are well known from a set of disassembled vessels buried near to the Khufu pyramid at Giza.”

“Since 1994, excavations of the Penn Museum have been undertaken at the Senwosret III burial complex in collaboration with Egypt’s Ministry of State for Antiquities,” Dr. Wegner added.

“The Senwosret III complex is located in the low desert, spanning approximately 2,625 feet (800 m) between the edge of the Nile delta and the foot of the high desert cliffs.”

“The temple and village components were created for the long-term maintenance of a funerary cult, ostensibly centred on a 590 foot (180 m) long subterranean tomb with its entrance inside a T-shaped enclosure that encompasses approximately 1.8 acres at the base of the high desert cliffs.”

“In ancient times, the location of this royal tomb was known as the ‘Mountain of Anubis,’ while the mortuary complex as a whole held the institutional designation: Enduring-are-the-Places-of-Khakaure-justified-in-Abydos.”

The boat is exceedingly well constructed and an excellent example of pharaonic mudbrick design.

“These bricks are the same size and composition as those used in the enclosure walls and other elements of Senwosret III’s tomb enclosure.”

“The structure is built into the desert subsoil, with massive main walls made of two rows of bricks and a plastered, gypsum-coated inner surface.” The walls are built on a harder, compact gebel, or desert subsoil.”

According to the researchers, only nine wooden boards remain from the original pharaonic boat.

“Surviving planking parts appear to stem from a roughly 65 foot (20 m) long boat that was buried complete but subsequently deconstructed for reuse of the wood,” Dr. Wegner explained.

“Although the dry desert climate should have contributed to great preservation quality, these wood elements are in extremely frail state.” The majority of the wood mass had been eaten by white ants, leaving a frass shell.”

“Two of the better-preserved boards are presumably cedar (Cedrus libani), and exhibit the same grain and texture as cedar documented in other usage in the royal necropolis of South Abydos.”

“These boards feature gypsum plaster covering remnants that appear to have been intended as a backing for a painted surface, albeit no color was saved.”

“It’s possible that they are decking or cabin pieces.”

The most notable aspect of the boat building is its decoration, which has numerous etched pictures of pharaonic watercraft, totalling more than 120 distinct boats, forming an informally organized tableau spanning over a total length of 82 feet (25 m) on the side walls and end wall.

“The astonishing concentration of boat drawings in the structure is unique and was enormously surprised to uncover,” Dr. Wegner said.

“It’s also apparent that there were previously many more boats adorning the vaulted top of the structure.” The incongruous location of watercraft in the desert raises a slew of concerns and puzzles that need answers.”

“The makers of this boat tableau might be persons engaged in the vessel’s initial transfer and installation in the structure.” “Perhaps these were participants in the rites, which were likely funeral in nature and may have accompanied the boat burial,” he said.

More than 145 ceramic vessels were also discovered, all of which were buried with their necks facing the entrance to the ceremonial boat burial.

“The containers are necked liquid storage jars, sometimes referred to as ‘beer jars,’ although they are likely used for storing and transporting a range of liquids,” Dr. Wegner explained.

“The morphology of the neck and rims dates these instances to the late 12th Dynasty (1850-1750 BC), verifying the contemporaneity of the boat construction, boat burial within it, and Senwosret III’s funeral enclosure.”

“A tiny percentage of the vessels (less than 5%) had a reddish brown, crusty residue within the mouth and in the sand immediately around the neck, indicating that they were flipped over when full of liquid contents.” Chemical examination of these organic materials has not yet been completed, but may suggest the storage of liquids other than water in a small number of jars.”

“Further excavations at the site may find further boats, as well as other characteristics associated with the burial rites of Senwosret III, or the other monarchs who were buried in the royal necropolis at South Abydos between around 1850 and 1600 BC,” Dr. Wegner continued.