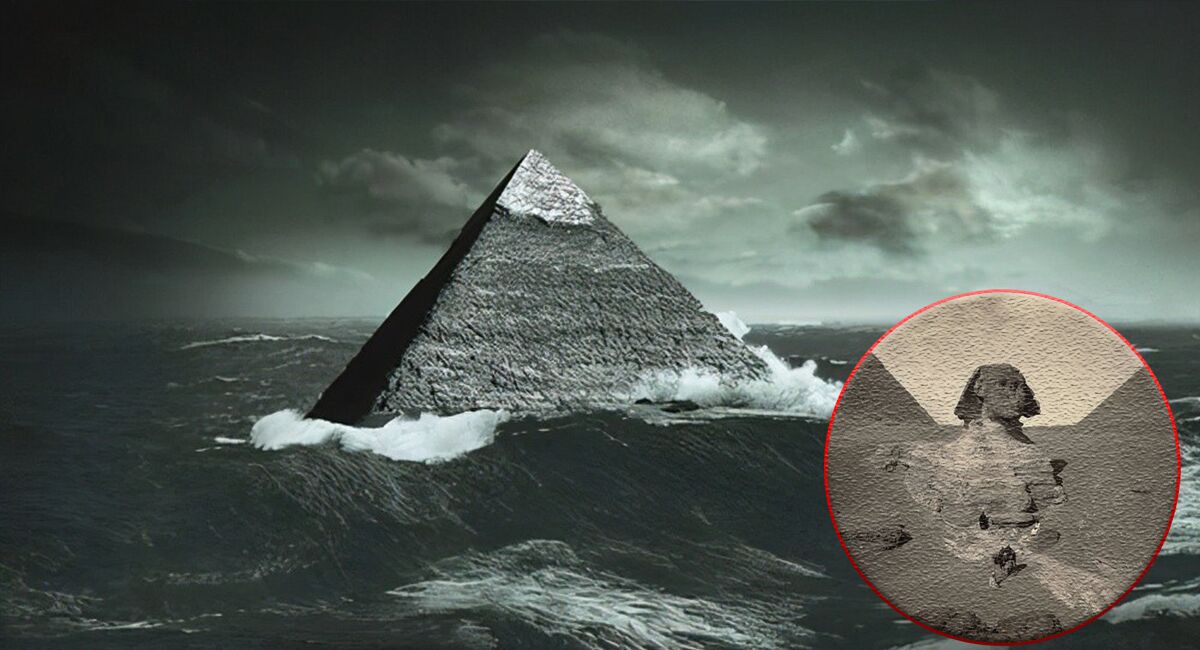 The whole Giza Necropolis, including the pyramids and the Sphinx, exhibits erosion, which some believe indicates the region was previously immersed in sea water. This view is bolstered by a single fossil.

Sherif El Morsi has spent over two decades working on the Giza Plateau, and in 2013 he collaborated with Giza for Humanity founder and fellow researcher Antoine Gigal to report his contentious finding of this fossil.

Dr. Robert M. Schloch was one of the first experts to really investigate the possibility that plateau formations are older than previously believed. In the early 1990s, he proposed that the Sphinx was thousands of years older than previously believed, ranging between 5000 and 9000 B.C., based on water erosion patterns discovered on both the monument and the surrounding granite.

Since then, Morsi has been delving further into the enigma. During one of his picture sessions documenting the erosion patterns of several of the region’s megaliths, he discovered evidence suggesting the area was underwater at one point.

“While photographing this historic beach line, I came dangerously close to falling off a second level temple block,” Mr. Morsi explained in a post published on the Gigal Research website. “To my amazement, the protrusion on the block’s top surface that nearly knocked me down was a petrified exoskeleton of an echinoid (sea urchin), a shallow water marine organism.”

Morsi thinks that a sea surge once swamped the Giza Plateau. The Menkara temple site, in instance, may have been an old lagoon when the Necropolis, the Sphinx, the temple complexes, and other monuments were buried by the high sea.

According to some experts, the echinoid was revealed in the limestone through erosion and was a component of the original limestone that originated 30 million years ago. Morsi, on the other hand, refuted those claims, claiming that the creature was cemented, or petrified, relatively recently, citing evidence that the creature is lying gravitationally flat, in pristine condition, within the lagoon’s intertidal range, and is a large specimen in comparison to the tiny specimens typically found in limestone blocks.

“We can observe the immaculate quality and minute features of the exoskeleton perforation,” Morsi added, “which indicates that this aquatic organism petrified quite recently. It is not a body fossil, as the majority of 30 million-year-old fossils are, but has been petrified by the silt deposits that have filled its depression.”

Morsi thinks that the flood was rather large, reaching a maximum elevation of around 245 feet (75 meters) above the present sea level and forming a beach extending from the Khafra enclosure near the Sphinx to the Menkara temple. According to Morsi, pitting and tidal notches caused by waves and tidal ebbing pepper the stones in this location, indicating a 6.5-foot (2-meter) intertidal range.

Additionally, the stones at places such as the Sphinx, the Sphinx temple, and the first 20 courses of the Great Pyramid are thought to have eroded as a result of increased water saturation. Sediment and alluvial, or material, deposits are seen on temple blocks on shallow sea bottoms and lagoons. As the water recedes, an oozing spongy effect occurs in the rock.

It would take around 15 years for an echinoid to grow to the size of the fossil, which is 3 inches (8 cm). Additionally, the quantity of sediments and alluvium deposits, as well as intertidal erosion in shallower places, would take millennia, implying that the area was inundated for an extended period of time.

However, determining the precise year of the floods is challenging. Sea levels have changed by more than 400 feet (120 meters) during the last 140,000 years as large ice sheets grew and receded throughout glacial cycles, according to CSIRO Marine and Atmospheric Research.