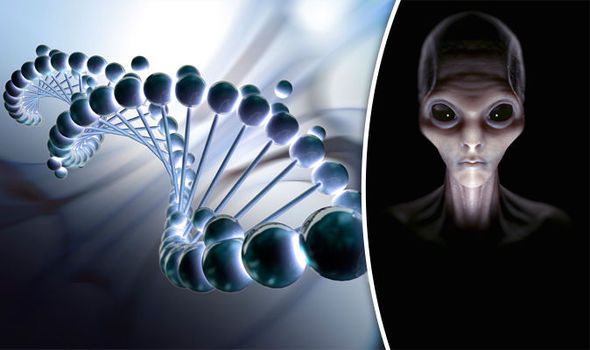 Many of the unsolved mysteries of our genetic make-up have been linked to the Cosmic Panspermia Theory, a hypothesis first put forth in Greece in the 5th century BC and later revived by Hermann von Helmholtz in the 19th century, which suggests that life has spread throughout the universe via meteorites, space dust, comets, and asteroids.

According to a pair of researchers, our DNA contains messages, mathematical and symbolic patterns that seem artificial and could be a “alien signature,” which could prove the theory of Earth’s extraterrestrial origins, although this theory is not new. They believe they have found an ancient code that could prove this theory.

They claim that “extraterrestrial scientists” may have visited Earth or transmitted an electromagnetic signal that would have changed our DNA hundreds of millions of years ago.

It is also possible that extraterrestrials “sowed” Earth with genetic material, and scientists believe they may have “sown” the Earth purposefully, resulting in life.

Scientists Vladimir Shcherbak and Maxim Makukov asserted that extraterrestrials from another solar system produced humans through genetic engineering and uncovered a “intelligent signal” inscribed in our DNA.

DNA looks to be an artificial, mathematically flawless invention, according to Shcherbak and Makukov: “The basic configurations of the code show a collection of architectural and ideographic patterns of symbolic language.” Using decimal notation and accurate and systematic logical transformations are also part of the process.

DNA’s “ideographic patterns” refer to the usage of symbols to represent actual physical objects. Also, in the genetic code, Shcherbak and Makukov discovered a repeating pattern of numerical values based on mathematical proportions and fractions.

According to studies done on the genetic code, which is the unchanging set of rules that translates DNA into proteins, the mysterious number 37 appears at least nine times in its chemical structure, with a probability of 10 trillion to 1 that this repetition occurred naturally and randomly.

A non-random structure is instantly apparent in the code. We’re not talking about a bunch of haphazard patterns here. “They have some qualities that are difficult for us to relate to natural processes,”

When it comes to DNA and our bodies, there is no greater connection than that of number 37.

A “receiver,” such as a radio or satellite, that absorbs electromagnetic waves is found in the genetic code, according to Shcherbak and Makukov. This would allow humans to communicate with our extraterrestrial founders directly and physically.

Makukov has no idea who decoded the cryptic message. “Maybe they departed a long time ago,” he speculates. It’s possible they’re still out there. It’s something I’d want to think about more in the future. However, according to the coding requirements, we feel our explanation is the most reasonable.”

Researchers from the University of Chicago in the United States discovered evidence of alien influence in a 2004 investigation.

Human evolution could not have occurred spontaneously since it is slow and unpredictable, and a “unknown event” occurred some 50,000 years ago, which spurred the development of the human brain to its current complexity.

Another major piece of data that should be noted is the Rh factor. Protein found in the membrane of hemoglobin-containing red blood cells is present only in patients with Rh Positive blood factor.

Humans are the only ones on Earth with the Rh Negative blood type, which is contrary to orthodox science’s assumption that this mutation occurred randomly throughout our evolutionary process.

Rh Negative may be proof of an ancient interbreeding between humans and extraterrestrials, according to some experts, who believe it is linked to the myths of “fallen angels” who mated with human women and gave birth to the Nephilins.

All of this evidence points to an alien presence in the distant past, and we will have the technology to read all of these mathematical hints and patterns in our DNA, allowing us to learn more about our ancestry and where we came from.